You can use Pure Acid as a groove box, or use it with other gear and apps, with features like Ableton Link, AudioBus and IAA-support.… END_OF_DOCUMENT_TOKEN_TO_BE_REPLACED

It’s March the 3rd, which means in both hemispheres, our thoughts inevitably turn to basslines and squelchy resonance. Happy 303 day – here’s some video and reading to get you in the mood.

First, let’s take a step back, and before we idolize the box and transistors, let’s talk about just how immaculately early Detroit and Chicago records were composed and mixed.

1987’s “Acid Tracks” by Phuture (DJ Pierre and Earl Spanky Smith) never fails to floor me. (I’ll guess the same about you, as anyone sick of acid has already left the room.) It sounds at once ancient and futuristic, like it fell from some alien civilization. “Acid Tracks” is slow, elegant, meditative – apparently slowed down to appeal to conservative New York dance floors; check out the fascinating write-up at the top of Discogs:

And, oh yeah – it’s a preset bassline. And very little actually happens in this track. You get the sense of that fresh, out-of-box, what the hell is this amazing thing feeling as a result – but whether intentional or not, it also means the duo settle on this fascinating groove and don’t overthink it. There’s an almost ritualistic, mantra-like steadiness to the track as a result. House legend Marshall Jefferson captures all of this with a mix that holds everything together, and weirdly I think gets away with the extreme panning from side to side, a kind of hypnotic incantation.

It may be the only time a preset pattern worked in a track, but… it works.

That same DJ Pierre joins Roland today to celebrate 303 Day – and yeah, he knows how to program patterns now:

I know we’re not supposed to covet gear as the solution to our problems but … there is something beautiful about really wanting a piece of gear to find a particular flavor, right?

It’s also great to hear Pierre talk about the satisfaction of turning a knob, and feeling like an improviser – I think that’s the essence of synth design. (I, uh, disagree with Maestro Pierre that this is the only instrument that did this, but then I don’t run an all-303 blog.)

But you think Japan is going to let us Americans have all the fun, with the gear they invented? Here is “Japanese Techno Girl Love TB-303 & TR-707 & RE-201” to answer that from the ocean. I’m not entirely sure I believe this is part of her bridal practice, but do you need to know whether that’s true or not?

For a good intro to the 303 and how to program it, Tatsuya Takahashi – former chief analog engineer at KORG – did an intro for RBMA. Seeing Tats talk Roland is weird, but on the other hand, I think Tats and his team at KORG built a lot of similar ideas into their instruments – hands-on control, simplified compact design, and a focus on playability. For all the present worship of modular synths and complexity, sometimes a simpler design lets the player explore more.

That skips over a lot of the history to focus on the instrument. So for a deeper look at how the 303 came about, check “Baseline Baseline,” a crude 2005 documentary. It feels a bit like someone is reading you a history of the 303 in monotone, but it’s a nice watch, nonetheless, packed with detail.

Philadelphia’s Akhil Kalepu did a great write-up of that history for DJ Tech Tools a few years back, as well:

To use the 303 yourself, your first question may be – have I heard that pattern before? (There is this funny quality of the 303, where you’re never certain if a pattern was your own, or a preset, or a classic tune, or the 303 somehow hijacked your brain and an alien consciousness made it for you, or … some combination?)

Let’s just not get too precious about acid house, though.

Part of what I love about the 303 is that it isn’t a classical instrument. You aren’t limited to reproducing half-assed copies of Chicago House just because that beautiful history is there. The 303 can get weird, dirty, trippy, unrecognizable. (Seriously, fight me on this. I love Roland’s TB-03 recreation not because it’s a perfect copy, but because it has some weird digital distortion and delay that you can abuse and warp.)

So, for instance, Germany’s Dr. Walker and Liquid Sky took acid in a different direction, some “acid techno” or make that “afterhour acid techno druggEEE madness.” Oh, sure, you could walk into a Berlin afterhours and someone could play some inoffensive slow tech house track. OR … you could wind up in some dark cave, three days into partying, thick with smoke, unable to find the door, when some end-of-the-world weirdness you can’t follow takes over, or some way-too-fast techno that is slowly speeding up. That’s the sort of 303 you might expect would be part of an unfriendly M-class planet, the kind the one surviving red shirt warned you about, holes burnt in his uniform, after beaming back up.

Hold on, though, back up – Sony Music published this? Interesting.

I bring this up just because it’s sort of nicely the opposite of the Phuture track. If the above is the 303 in calm meditation or headed to a wedding, this is a disheveled 303 stumbling out of a bar in Akihabara, its tie in shreds (uh, drunk on alternating current or whatever synthesizers get into):

Acid is getting new leases on life, too, as in the hands of Bloody Mary, the French-born, Berlin-based producer and label boss of acidic dame music. She’s keeping acid alive both as a DJ –

– and as a producer. (Got to talk to her about her love of the 303 and the ability to really focus on this instrument at ADE in the fall.)

So be sure – we love the 303, but its day is not a sacred one. It’s a chance to do what we do every night – make ridiculous sounds with knobs.

And just remember – don’t let anyone convince you synthesis is a game for the rich. The 303 found its way into history thanks to some guys who could only barely afford it, after it had already dropped in value. Speaking as someone who reads tons of press releases from artists bragging about their all-modular setups, this is something worth repeating – and a happy 303 day to you.

Here’s how to get classic acid rave sounds using a Roland TB-303 and effects. … END_OF_DOCUMENT_TOKEN_TO_BE_REPLACED 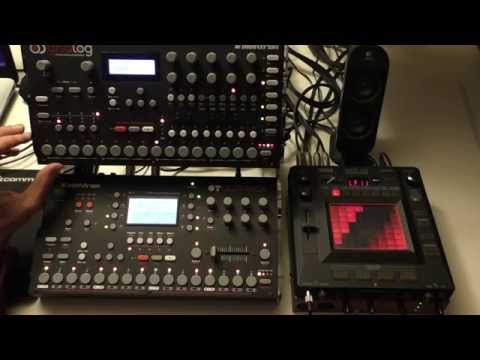 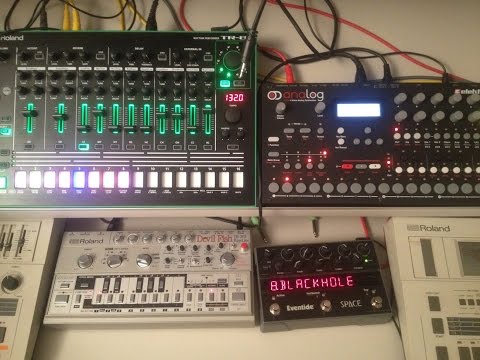 The greatest acid house track of all time is Acid Tracks by Phuture. They have never played in NYC. That changes tonight as they will take the stage in Williamsburg, Brooklyn at Verboten.

“Yes there may have been Acid recordings before Phuture – Acid Tracks but this is the one that really propelled the Acid style in chicago clubs, this was originally created and played at the music box by Ron Hardy in 1985 2 years before its release… and they don’t come better than this” – Leroy Skibone

One of the greatest acid tracks ever by Tyree Cooper. Recorded in 1987. Two TB-303s in actions here. He’s from Chicago and now lives in Berlin.

“A fan of both house music and hiphop back in the 80s, the young producer sought to combine elements from both genres into the genre that soon went on to become known as Hiphouse. It eventually lead to the release of the now legendary ‘Turn Up The Bass’ in 1989, a track that –along with Fast Eddie’s ‘Yo Yo Get Funky amongst others’ is widely considered to be an all-time (hip-)house classic.” – beatsandbeyond.com