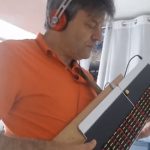 The unique controller supports MPE and polyphonic aftertouch via MIDI over USB.… END_OF_DOCUMENT_TOKEN_TO_BE_REPLACED

Joué has launched a Kickstarter to fund production of Play, a more affordable version of its modular music controller platform.… END_OF_DOCUMENT_TOKEN_TO_BE_REPLACED

Sunday Synth Jam: In this video, Quincas Moreira plays Vangelical Cat, an improvisation for LinnStrument and modular. Here’s what he shared about the technical details: “An improvisation using the Linnstrument 128 and FH2 to control a Multi Polyphonic Expression patch on the Eurorack Modular.”

Polyend’s Tracker may be getting all the attention, but the company’s Medusa – an expressive controller and synth combo – just got another batch of improvements. And that builds on one of the more unique and versatile pieces of electronic instrumental hardware around now.

To entice would-be Medusa owners, the latest edition is nire affordable ( 699€ / US$799) and has attractive, minimalistic new letter.

To add to what the Medusa does, it’s got a new firmware with some big features.

It’s not just about finding the new shiny; there’s reward in instruments that grow and evolve with you over time. It’s a two way street; smart makers add depth and respond to users, too.

Medusa was interesting from the start in that it is multi-dimensional. It’s a collaboration between makers (Polyend and Dreadbox), it’s a controller and a synth, and it has analog circuitry (noise and oscillators and filter) but also digital innards (wavetable sounds and digital control and modulation). Of course, it has to then add up to more than those, or you get the dreaded “shampoo plus conditioner in one / shampoo and body wash” effect where it’s trying to be too much at once.

That’s where the digital side comes in. There’s no question the analog sounds are edgy and rich, but with firmware upgrades, you’ve gotten more wavetables, more control, and – crucially, a better and better controller.

Since this thing is long and made of metal, it’s most useful when it also works as a controller for other instruments. And that’s what this firmware 3.0 is all about.

More modulation: as has been often requested (including by me, for instance!), now the Medusa has a random wave LFO.

MIDI Local Off option lets you use the MPE pads to play another instrument while an external controller (or sequencer) play the internal sound set.

That is actually a big deal – because it is pretty common that you might start building sounds on the Medusa, but then want to have a live performance where you use it with something else (like a software or hardware modular rig). Now you can do that and still trigger/sequence/tweak the internal sound engine.

Use envelopes and modulation for control. The Medusa’s grid is expressive and sends MPE, it’s true. But now the powerful LFO and envelope system onboard also spits out MIDI CCs for other gear.

CCs are displayed on-screen. If you are sequencing some elaborate control, you’ll appreciate that there are CC numbers shown on the crisp Medusa screen.

As Jacek from Polyend points out, “With all the LFOs and ENVs being sent out as MIDI CC communicates and the Grid controller working in the MIDI Local off, Medusa becomes a much more potent modulation source/external sequencer/MPE controller. Especially bundled with our Poly2 for Eurorack systems “

It’s also a powerful system for use with VCV Rack, for people like me, I might add.

These are renders of the new hardware, matte black anodized aluminum.

But the firmware is for everyone – including new preset packs. You won’t get the nice new lettering, but all existing Medusa owners can use the new firmware.

The Tracker is really cool, but there are reasons to pay attention to its lesser-known sibling. Medusa is still the box you want if you want a deep synth – and its analog + wavetable + rich hands-on modulation and envelope system is still like nothing else out there. Plus, it remains one of the most unique MPE polyphonic expressive controllers available – and one of the few under a grand that has differentiated pads.

I am literally off to spend some days with this now.

More videos of the (original edition) in action:

ROLI has announced that ROLI Studio, a collection of their software synths, is now available unbundled from their hardware.… END_OF_DOCUMENT_TOKEN_TO_BE_REPLACED

The ROLI Studio sound library and production-tool suite features two powerful MPE plugins — ROLI Studio Player and ROLI Studio Drums, with many sounds from FXpansion’s Strobe2 and Cypher2, as well as others from ROLI’s Equator software synthesizer built for MIDI Polyphonic Expression. It is now possible for anyone to access ROLI Studio, whether you […]

Orba is a $99 portable synthesizer, looper, and MIDI controller that’s designed to let anyone to make music immediately. They describe its minimalist design as “a cross between a gaming controller and half an orange,”.… END_OF_DOCUMENT_TOKEN_TO_BE_REPLACED 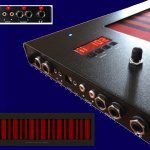