Deep in the Arctic Circle, the USSR was drilling deeper into the Earth than anyone before. One artist has combined archaeology and invention to bring its spirit back in sound.

The borehole was so epic – and the Soviets so secretive – that it has inspired legends of seismic weapons and even demonic drilling. (A YouTube search gets really interesting – like some people who think the Soviets actually drilled into the gates to Hell.)

Artist Dmitry Morozv – ::vtol:: – evokes some of that quality while returning to the actual evidence of what this thing really did. And what it did is already spectacular – he compares the scale of the project to launching humans into space (well, sort of in the opposite direction).

vtol’s installation 12262 is the perfect example of how sound can be made material, and how digging into history can produce futuristic, post-contemporary speculative objects.

Archaeology. Dima absorbed SG-3’s history and lore, and spent years buying up sample cores at auctions as they were sold off. And twice he visited the remote, ruined site himself – once in 2016, and then back in July with his drilling machine. He even located a punched data tape from the site, though of course it’s difficult to know what it contains. (The investigation began with the Dark Ecology project, a three-year curatorial/research/art project bringing together partners from Norway, Russia, and across Europe, and still bearing this sort of fascinating fruit.) Invention: The installation itself is a kinetic sound instrument, reading the coded information from the punch tape and operating miniature drilling operations, working on actual core samples. The sounds you hear are produced mechanically and acoustically by those drills. As usual, Dima lists his cooking ingredients, though I think the sum is uniquely more than these individual parts. It’s as he describes it, a poetic, kinetic meditation, evocative both intellectually and spiritually. That said, the parts:

The work was also a collaboration with Gallery Ch9 (Ч9) in Murmansk. That’s itself something of an achievement; it’s hard enough to find media art galleries in major cities, let alone remote Russia. (That’s far enough northwest in Russia that most of Finland and all of Sweden are south of it.)

But the alien-looking object also got its own trip to the site, ‘performing’ at the location. It’s appropriate that would happen in Russia. Cosmism visionary Nikolai Fyodorovich Fyodorov and his ideas about creating immortality by resurrecting ancestors may seem bizarre today. But translate that to media art, which threatens to become stuck in time when not informed by history. (Those who do not learn from history are doomed to make installation art that looks like it came from a mid-1990s Ars Electronica or Transmediale, forever, I mean.) To be truly futuristic, media art has to have a deep understanding of technologies progression, its workings, and all the moments in the past that were themselves ahead of their time. That is, maybe we have to dig deep into the ground beneath us, dig up our ancestors, and construct the future atop that knowledge. To me, these two themes – materiality, drawing from kinetic, mechanical, optical, and acoustic techniques (and not just digital and analog), and archaeological futurism, employing deep historical inquiry that is in turn re-contextualized in forward-thinking, speculative work, offer tremendous possibility. They sound like more than just a zeitgeist-friendly buzzword (yeah, I’m looking at you, blockchain). They sound like something to which artists might even be happy to devote lifetimes.

For another virtual trip to the borehole, here’s Rosa Menkman’s film on a soundwalk at the site in 2016.

Between art tech and techno, past and future, a view from Russia

And on the kinetic-mechanical topic: 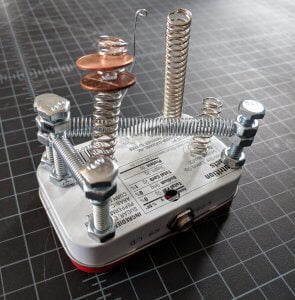 Ben Burnes has released a sample pack featuring a collection of over 100 free samples recorded from a homemade piezo springbox. The box may look cheap, but I was really surprised at the wide variety of sounds that you can generate with it. This pack contains metallic clanks, boings, taps, scrapes, and other unique sounds […]

Here’s a fun hack: a vintage-style meter needle turns into a source of percussion and signal for a modular.

“Don’t plug this into that” or “that’s not what this is supposed to be for” are not really concepts obeyed by the electronic musician. So thanks to Simon Kitson for sending this in. In this case, a modular synth is involved but — really, you could do something like this with any random bit of gear and some piezos. (Piezo mics, in turn, are something you can build yourself for a few bucks with decent – to – terrible soldering skills.)

From a capitalist perspective, I should have course regularly be encouraging you to go spend your money on gear all the time but … this hack is totally compatible with “I just found some junk someone left by a dumpster.”

I thought that you might be interested in this video of a vu meter being used as percussion with CV and a balanced piezoelectric pickup. It is a great return on a limited investment in time.

Excellent. Plus those needles are fun to watch wiggle, of course. Enjoy!

IK Multimedia has announced the release of iRig Acoustic, the first acoustic guitar mobile microphone/interface specifically made for acoustic guitars and ukuleles. No kit – but no sequencer. Using the ZenDrum controller, musician Nick Froud (left) is one of a handful of growing artists using finger dexterity to trigger electronic sounds in an entirely human fashion – no machine timing needed. Photo by Joseph Shepherd, courtesy the band.

For years, drummers have had to look sideways at drum machines — boxes with step sequencers blinking, out to replace them. With acts like The Age of Glass, tables are turned. The sounds are electronic (Access Virus, Machinedrum), but the playing is all live. Drummer Nick Froud plays all those parts without any sequencing, fingers blazing.

The band has a self-released (Bandcamp) EP out this week, as well as some videos of them working away at the studio. The results are jammy, trippy, grooving good times. Great to see the studio work and recording, but this must be a lot of fun to dance to live; the band is making its way round the UK now.

Watch the band in action:

Nick is a CDM reader and tells us a bit about the experience of working this way:

Finger drumming is used as an integral part of the sound. We play dance music entirely live, no loops or sequencing. It has taken serious practice for playing digital sounds to feel like a real instrument, but the Zendrum really helps. It is a serious investment but well worth it — no other finger drumming pads come close, being mostly based on force-sensing resistors rather than the Zendrum’s piezo-based approach.

To be clear, the piezo-based approach means that the Zendrum is closer to drum triggers used on kits than the drum pads you typically see on drum machines. I’m no finger drummer, but having seen this hardware up close, it is extraordinarily sensitive to tiny variations in playing, a kind of unique hybrid digital instrument. With the electronic sound sources in the background – Access Virus and Elektron Machinedrum – Nick puts those fast fingers into action. Photo by Ed Sprake, courtesy the artists.

The post Down with Sequencers: The Age of Glass Finger-Drums Through Their Beats, Live [Videos] appeared first on Create Digital Music.

Stephan Vankov has launched Pulse, a surface controller system comprising a piezo mic and a software interface allowing you to play virtual instruments by finger tapping. At the core of all music creation lies a pulse. In an age of gear-overload, many of us have forgotten the most effective and intuitive pulse generator – a […]

You know the type. The drummer who, even robbed of drum sticks, is tapping on the walls, the car door, the desk… and maybe you are that person. When rhythms and musical gestures are bouncing around your head, the whole world just feels like something you want to play. It seems as natural as breathing.

So, given your computer can make anything an input, why shouldn’t it let you play like that?

A new controller and software combo seeks to make that possible. The work of one enterprising musician and creator, Stephan Vankov, it includes an affordable accessory with a piezo microphone and companion software to map it your taps to MIDI messages, for use with your favorite software musical instruments. Plug in the mic sensor, and you can tap your desk or slap your laptop or play any other surface.

We’ve seen this idea in various iterations before – most recently, at the party we co-sponsored in Los Angeles last month, we witnessed an entire ensemble using the motion sensors in their laptops. (That tool is available as an open source download, if you fancy hitting your computer.) Until now, though, these piezo controller rigs been a DIY affair. Stephan’s solution includes what appears to be nicely-made hardware — so you can dump it in your carry-on without worry. And the software includes a wide array of settings to map more easily to percussion and melodic instruments. (The software is now available for Mac, but with Windows and Max for Live versions on the way.) I hope to get one to test soon.

Intro pricing begins at US$59. I wanted to let you know about a product I’ve been developing – the Pulse Surface Controller. The idea behind Pulse Surface Controller is to liberate computer-based musicians from conventional input devices of predetermined form factor and layout, and allow the user to turn a surface of various size, orientation and material into an expressive, flexible, reconfigurable MIDI controller.

The system includes a wired piezo microphone that can be attached to a surface via the integrated suction cup (or the included velcro strips) and connected to any computer audio input, as well as a standalone software application that converts acoustical impulses from the microphone into velocity-sensitive MIDI data. With the Pulse Surface Controller System, controlling percussive instruments has a more visceral, immediate quality, and via a powerful Melodic Generator that can generate notes in various scales the user can easily extend into the melodic domain to tap into an inspiring world of happy accidents.

I am very excited to share this project with fellow musicians and hope that you find this idea to be worth sharing with the CDM community!

The idea behind Pulse Controller was born out of the belief that as computer-based musicians and performers we should not feel relegated to a grid of small 1×1″ pads or a keyboard to create our rhythms and provide pulse to our music. Controllers once intended to give us the immediacy of playing an instrument often end up feeling more disconnected and distracting. With the Pulse Surface Controller System, controlling percussive instruments has a more visceral, immediate quality, and via a powerful MIDI generator that generates notes in predefined musical scales the user can easily extend into the melodic domain to tap into an inspiring world of happy accidents. Power to the fingers!

Side note: interestingly enough, I got to know Stephan in person at a NAMM afterparty we threw in LA, at which Stephan was playing a Karate Kid AV mashup with friends Shane Hazleton and Momo The Monster. So, nice to see what Stephan has been working on!