Karoryfer Samples has announced its latest sample library for Plogue’s free Sforzando sampler. Secret Agent Bass features the sounds of a 1972 oddball bass guitar made in Poland. It’s got a big but thin hollow body, a medium 32″ scale, a bolt-on neck, and flatwound strings. Old-school sounds full of character and thump. Made in […] 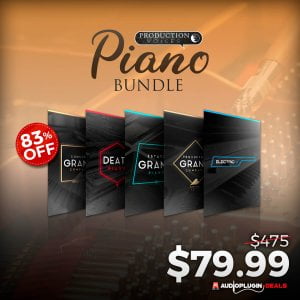 The post Save 83% on Production Voices SFZ Piano Bundle, on sale for $79.99 USD appeared first on rekkerd.org.

The post Save 50% on Plogue “chip” range of instruments and effects appeared first on rekkerd.org.

“This is a demo of some presets from the Plogue Chipsynth MD plugin which emulates the Sega Mega Drive (Genesis) FM synth. It also includes some built-in effects.”

Plogue has announced the release of its new chipsynth MD plugin, a 16-bit four operator FM synthesizer for Windows and Mac. The plugin brings the sounds of the Sega Mega Drive, featuring a bit accurate OPN2 (YM2612) emulator combined with a SN76489-compatible square wave core (SPSG) and a special emulation of the very crunchy sample […]

“Plogue is continuing their deep dive into preserving old synth chips found in game consoles. This time it’s the legendary Yamaha chip found in the Sega Megadrive. It sounds amazing. I love it.”

This member of the chipsynth line is a feature-rich four operator FM synth that packs quite a punch!
The Mega Drive™ – also

The Sega Genesis, aka Mega Drive, was more than just a beloved game console. It was also a powerful FM synth – seriously. And now you get an accurate, powerful version as a plug-in, in chipsynth MD from Plogue.

If you’re a Sega fan, you know the sound of this instrument from the sunny, sparkling, high-energy game soundtracks of the era. So, for you, yes, there’s a bit-accurate emulation of the OPN2 YM2612 chip and SN76489-compatible square wave core (SPSG). There’s even a recreation of the crunchy lo-fi sample playback.

If you want to hear those vintage soundtracks the way they were intended to be heard, there’s even a VGM player. For Sega game fans, this is your new iTunes.

Whoa – if none of that meant anything to you, think of it this way: this is a 6-part polyphonic recreation of the 4-voice FM synth with a stupid amount of sound controls and grungy retro sample playback as a separate feature.

Listen to the new sounds you can get out of it:

But it doesn’t sample the Sega. It’s a loving recreation from the folks at Plogue, who have gotten deep into this sort of hardware recreation.

It’s oddly entertaining just watching them work with their test rigs to make this happen:

And for a full tour, Cockoo takes the software for a test drive:

More at the product page:

This is the second of the chipsynth line, following a recreation of the lo-fi Yamaha PortaSound line. Put the two together, and you have two unique takes on FM.

Karoryfer Samples has released its new sample library Vengeful Cello, a Sforzando instrument that brings a collection of strange, wild and often aggressive sounds. Though everything was recorded in just one afternoon, there are nineteen different techniques here, and over 4000 44.1 kHz 24-bit samples. It covers everything from warm sul tasto sustains to scratchy […]

Karoryfer Samples has a new virtual drum kit for the free Plogue Sforzando sampler called Big Rusty Drums, featuring the sounds of a drum kit that was built by Zygmunt Szpaderski in a one-man workshop in Poland. The collection also includes sounds from a large floor tom made from an Estonian-made RMIF kick drum, and […]